[Study] Private-company sales growth down significantly over past 12 months

The rate of annual sales growth among privately held U.S. companies is slowing significantly, according to new data from Sageworks Inc., a financial information company.

Average annual sales growth for private companies has slowed to around 5.4 percent currently from nearly 11 percent in January and from around 8 percent a year earlier, according to the Sageworks Private Company Indicator, a real-time measure based on financial statements filed in the most recent three months.

And while 5.4 percent is still a faster rate of growth than the broader U.S. economy is experiencing, it’s the slowest rate since November 2010 and comes at a time of mixed results for other economic indicators, including choppy consumer spending.

Friday’s employment situation report also indicated sluggish job growth continues, with employers adding only 96,000 jobs to nonfarm payrolls in August, according to the U.S. Department of Labor. An average of 139,000 jobs have been added per month this year, compared with 153,000 in 2011.

Sageworks CEO Brian Hamilton notes,” The biggest issue for businesses right now is that they don’t know what is going to happen on major fiscal issues that affect their businesses. As such, they cannot plan out 12 and 24 months and adequately forecast their revenues, profits and cash.”

“The slowdown in revenue growth could have significant implications on vital issues such as job growth and GDP. Hopefully, all of this does not indicate that we are sliding into another economic downturn.”

Since private companies drive significantly more than 50 percent of GDP and 65 percent of new job creation in the United States, private company financial performance is a gauge of the health of the wider U.S. economy. 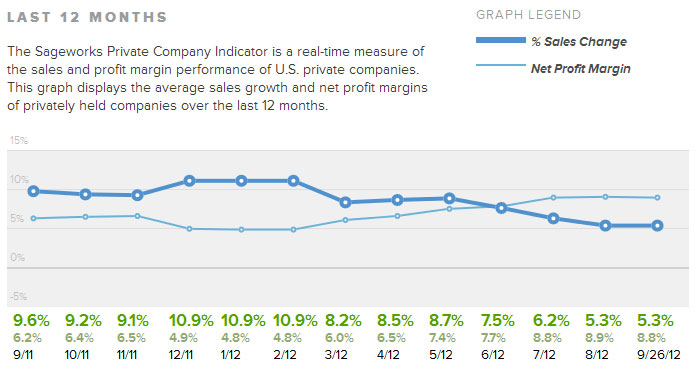 Mary Ellen Biery is a research specialist at Sageworks, a software company that develops software for financial professionals and small businesses. Biery is a veteran financial reporter whose works have appeared in The Wall Street Journal, Dow Jones Newswires, CNN.com, MarketWatch.com, CNBC.com, and other sites.