WalletKit, Co-Founder Kevin William David: How We Got Into 500 Startups to Power the Future of Mobile Wallets

Learn how WalletKit got noticed and funded by 500 Startups while based in India and why Kevin believes you must never give up, even when you fail.

What would you do to take advantage of an opportunity? Entrepreneur, Kevin William David stopped at nothing to ensure his startup was poised for success. Even if that meant pitching his concept to 500 Startups partner, Paul Singh, in a cab ride to the Bangalore airport.

Kevin, while living in India at the time, saw an opportunity to get his company in front of one of the nation’s premiere accelerators, 500 Startups, a seed fund and startup accelerator program that provides early-stage companies with up to $250K in funding, access to mentorship and unique networking events.

He aimed to pitch WalletKit in a unique and attention-grabbing way to spark Singh’s interest in the platform, which he believed would power the future of mobile wallets.

Quirk, an international marketing agency, suggests that “Using one’s handset as a financial tool, or the mobile wallet is an interesting concept which is becoming increasingly popular and integrated across consumer platforms. Not only does it allow users on the move to access financial accounts, but also plays an integral part in the development of digital commerce and banking.”

“The mobile wallet is proving especially effective in developing countries where desktop access to the Internet and banking opportunities are still a privilege, yet mobile accessibility is extremely high,” according to Quirk.

WalletKit aims to capitalize on this growing trend by helping businesses with adoption, enabling the design of aesthetically pleasing, Passbook-friendly coupons, tickets, passes, and gift cards without coding knowledge.

Using their virtual pass builder, businesses can create passes from scratch and track metrics including clicks, opens and downloads. “At Walletkit, we make it super simple for companies to integrate with mobile wallets like Passbook, Google Wallets, and other similar mobile wallets,” says Kevin William David.  “Apple does not have a specific type of notification format so we have our own API that companies can integrate with different mobile wallets which is not too expensive or time consuming,” he notes.

Learn how WalletKit got noticed and funded by 500 Startups while based in India and why Kevin believes you must never give up, even when you fail.

Apple Passbook is a mobile wallet available to iPhone software. It helps you store gifts cards, movie tickets, coupons, store cards, etc. in your phone. So when you go to Target or Starbucks, for example, the app knows exactly where you are and a coupon will pop up on your iPhone screen at the exact time and location that you need it.

There are a lot of mobile wallets other than Apple Passbook such as Google Wallet. We realized that there are going to be a lot of adoptions for consumers like us to use Apple Passbook.

We wanted to help companies that wanted to adopt Passbook and make it simple for them. We knew the market was so huge that we could connect to different mobile wallets because this is potentially the way people will manage tickets and stuff a couple of years from now. So we decided to start right now and create a central platform for businesses to create, manage and deliver digital boarding passes, tickets, store cards, coupons for mobile wallets. 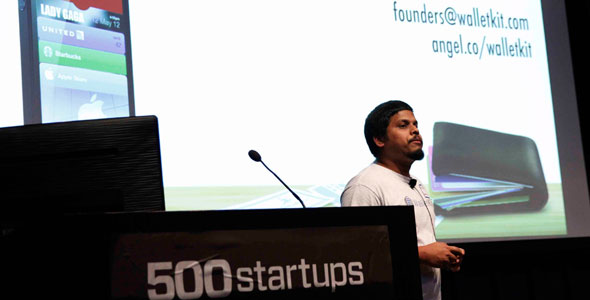