Learn how Hursh Agrawal and Josh Miller's affinity for intellectual debate inspired the creation of Branch and why Agrawal believes persistence is essential for success.

[pullquote align=”right”]Branch aims to deliver a new brand and venue of high quality public discourse by using their online platform to bring “the intimacy of a dinner table conversation to the openness of the Internet.”[/pullquote]In late 2011, NYU student Hursh Agrawal and Princeton student Josh Miller each took a leave of absence from their universities and teamed up with Cemre Güngör to build a company called Roundtable.

The trio bootstrapped the company from New York City for four months, eventually moving to San Francisco in early 2012 to build the product with guidance from investors. In May of that same year the company — now called Branch — returned to New York City to empower people to talk about the world around them.

“[Josh and I] were working on [Branch] for about a month and we got some traction out of two conversations,” co-founder Hursh Agrawal explains. “Then [we] decided to drop out of school (i.e. take a leave of absence) so we could keep working on it. A few months after that we met Cemre (who would soon become our co-founder and lead designer).”

Today Branch (formerly Roundtable) aims to deliver a new brand and venue of high quality public discourse. Curated groups of people are invited to engage around issues on the online platform and bring “the intimacy of a dinner table conversation to the openness of the Internet.” The founders believe it is a necessary departure from the monologues we have grown so accustomed to reading online. The trio’s gamble appears to have paid off. To-date the company has received $2M in seed funding and works with publishers, like USA Today (for March Madness) and PBS to change the future of online conversations.

Learn how Hursh Agrawal and Josh Miller’s affinity for intellectual debate inspired the creation of Branch and why Agrawal believes persistence is essential for success.

Josh, my Co-founder, and I really had this hankering for debate and discussion. I also like panel discussions; I really enjoy going to them and watching them. So when we got together, we tried to figure out why it didn’t exist online.

These kinds of conversations exist in email and in chat rooms, but they’re not available for anybody to see. So, that was our original idea.

We initially invited 5-10 interesting CEOs, or designers, and had them hold online events and participate in these conversations. We saw that it produced an interesting concept; they really liked seeing the conversation and people liked reading it.

That was our initial idea and we kept iterating from there, making it more of a consumer platform so anybody could start their own conversation.

I’m a developer and I was in school for Computer Science; so I built most of the initial prototype for the site… Josh was really into product and how people interact with each other, so he was more naturally suited for a product role while I helped develop the product… Cemre is a phenomenal designer so having him on board helped push the product further and made it look amazing. 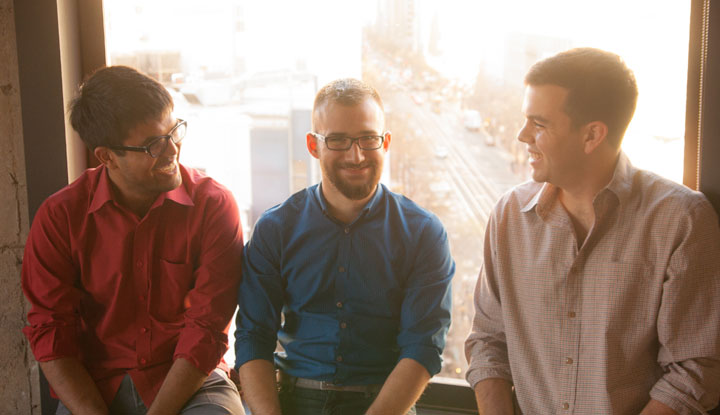