‘What I Really Felt Was Relief’: A #Girlboss Journey From Job Loss To Entrepreneurship

I wish I could say pursuing my passion was all butterflies, rainbows, and puppies — it wasn’t. I didn’t have other doors opening left and right… I had...

You know that saying: “When one door closes, another one opens”? Talk about a cliché. It seems like something that people with endless opportunities would say. It’s much like people with money who seem to be the only ones who say that money doesn’t matter.

When a door closes—one that you’ve put your blood sweat and tears into opening—it sucks! It is incredibly hard.

One chilly January morning, I arrived to work only to learn that the company I worked at was shutting down their marketing division indefinitely. Which meant they no longer needed someone to oversee their marketing. I was that “someone”.

It’s hard not to take it personally when you lose your job.

I suddenly was overcome with a lot of negative and egocentric thoughts running through my head. “Wow!” I thought. “How badly did I bomb that they just shut it all down?”

“Am I that scary that instead of just letting me go they decided to kill the entire marketing team?” I wondered.

Of course, the decision had nothing to do with me. But I indulged myself with a self-centered pity party for one the rest of the day.

“I had spent way too much of my life working non-stop on building someone else’s business.” Click to Tweet

To be honest, though, beneath the temporary ego-blow, what I really felt was relief. I had spent way too much of my life working non-stop on building someone else’s business. It was meant to be a part-time deal, one that would enable me to pursue my own entrepreneurial dreams at the same time.

What inevitably ended up happening, though, was that I spent all my energy earning that steady paycheck.

And I was so exhausted from being miserable that instead of spending what free time I had building my own business, I would collapse on the couch to watch an episode of the Blacklist.

I was truly unhappy at that job.

“And I did it because I lacked the balls to pursue my passion.”

I can blame a dozen different things for my unhappiness (e.g., unrealistic expectations, micromanagement, lack of recognition), but the reality is the main thing that made me miserable was the fact that I was doing everything I wanted to do for myself, for someone else.

And I did it because I lacked the balls to pursue my passion.

I was afraid of not being able to make a living on my own terms. So I sold out to the corporate gig that assured me a nice deposit every fifteen days. I also became dependent on a steady dose of retail therapy, which was a vicious cycle. I was unhappy at work, so I shopped to feel better, which made me more dependent on my paycheck, which kept me stuck at work!

I wish I could say that I finally realized this one morning and quit my job to pursue my dreams. I didn’t. I stayed stuck there. I might have stayed there indefinitely, quelling my unhappiness with trips to Sephora and pints of Pinkberry.

I kept fighting against this voice in my head saying “leave”. Instead I indulged in fantasies of quitting without ever being able to make the decision to actually do so. Fortunately, life made that decision for me.

I can honestly say, being let go from my job was the best thing that ever happened to me. Because at that point, I had no choice but to make my business succeed. All those excuses I used to have, the fears that used to hold me back… I no longer had the luxury to give in to them.

I sucked it up and made it work. I tightened my budget, which was admittedly easier once I stopped needing things to make me feel better.

And guess what? It was hard. It was really hard.

'I didn’t have other doors opening left and right… I had to pound on them.' Click to Tweet

I wish I could say pursuing my passion was all butterflies, rainbows, and puppies — it wasn’t. I didn’t have other doors opening left and right… I had to pound on them. I would finally manage to get some to open, only to have them slammed back in my face.

The thing is… I wouldn’t change it for anything. I finally found the courage to go after what I’ve wanted all along. I stopped listening to that voice in my head (and the voice outside of my head called pragmatic family and friends) saying, “It’s too risky. Get another job. You can’t possibly succeed at your own business.” And a great thing happened.

I stopped having those existential crises that used to eat away at my soul. I stopped worrying about what I was going to do with my life. I no longer wonder if I was on the right path. I finally feel like I am exactly where I need to be.

Andrea Novella is a Guatemalan Jewelry Designer and Social Entrepreneur behind TRUE, a company whose fundamental purpose is to be an authentic brand committed to making a positive impact. She combines traditional textiles and local artisanship with fine jewelry techniques to create fair trade, high fashion jewelry with an exotic bold style. Connect with @shopfortrue on Twitter. 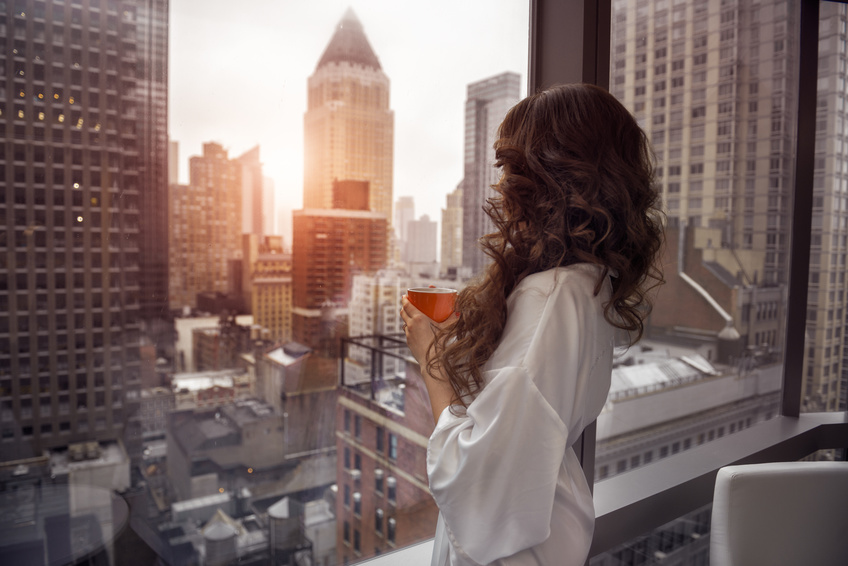