One Entrepreneur, An Exile Lifestyle and Ebookling

Meet Colin Wright. Learn how one entrepreneur leads an exile lifestyle, travels the world and launches a new company - all the while launching lifestyle experiments just for...

Meet Colin Wright. Learn how one entrepreneur leads an exile lifestyle, travels the world and launches a new company – all the while conducting lifestyle experiments just for fun.

I’ve always been a voracious reader, and my first job at 14 years-old was working for an independent bookstore.  Five years later I still loved the job, but moved off to college and ended up writing for the newspaper as a columnist instead.

A few years later I started a blog called Exile Lifestyle because 1) I missed writing and 2) I wanted to build a platform through which I could build out my personal brand and invest in as an asset. The blog took off, attracted a large audience and attracted a couple of gents named Miles and Justin, who are now the COO and CTO of Ebookling, respectively. They helped me take my initial concept, built from my experiences publishing eBooks, and develop a platform for authors to become the masters of their own financial destiny. Essentially authors can become their own publishing companies.

No Budget? No Problem!

I started my first business when I was in college at 19 years-old; it was a culture magazine. The magazine itself was tricky – getting enough submissions, laying everything out, getting advertisers on board, etc. But the launch party was something else entirely different. I had never done anything closely related to throwing an event. Because of this, I grossly overestimated what I would be able to get done. I rented out the biggest place I could find downtown, got 7 bands and 6 designers on board and promoted the launch party as a both a concert and fashion show.

The bands were comprised of different music genres and in between each set a designer would show their collection. The stage became the catwalk. It was complex, and there was no way it would work, especially since my budget up front was a great big ZERO. But it worked. The place was flooded with people, and it ended up being one of the biggest turnouts for that kind of event in the history of the city. We were able to pay everyone more than we promised them, and the team I assembled got huge exposure for their craft – especially when people found out that they did it on a non-existent budget. That left me pretty high for a while!

For me, it’s finding people that I want to work with. I have no problem starting up very small businesses that bring in enough income for me to pay myself and experiment in different industries. But to scale I need a good team. It’s incredibly difficult to find people with the right combination of skills, ambition, passion and personality. I really lucked out on Ebookling, actually, because they came to me. Usually the search would take a lot longer than it did.

If you want to hire more people, the speed goes down. It seems counter-intuitive, but organizational complexities increase exponentially with each new voice in the chorus. In contrast, energy levels can be maintained more steadily, since you have more hands to distribute the labor to. Unfortunately, to get those extra hands, you need money and to earn the money you need to get where you’re going faster. It’s a pretty vicious system, but if you can overcome it, you’re in a good spot

Don’t get married to any idea. This actually came from design school, not any kind of business class. We were tormented by some of our professors, who wanted to teach us that our work wasn’t perfect. No matter how much we liked it, someone else wouldn’t and we would lose the work if we couldn’t adapt to this and avoid lashing out in response.

Just keep this in mind: YOU are the asset, not your idea. If you’re as good as you think you are you can always come up with a new idea – a million new ideas. You should have ideas coming out of your eyeballs. The hard part will be filtering and deciding where to apply your torque. This means that if one doesn’t work, isn’t viable right now, or if you’re beaten to the niche by someone else, don’t worry about it. Buy a bag of Doritos, listen to some dramatic 90’s pop music and then get back to work after morning for a few hours.

In my mind, the real measure of an entrepreneur is how quickly they can bounce back from failure, because failure will happen. I challenge you to find me an entrepreneur who hasn’t failed at least a few times in their career. It just doesn’t happen.

If I had to start all over again, I would …

Speaking of Ebookling, I don’t think I’d change a thing. I wish I would have been able to find a good team faster. But, when I think back to when I first started Ebookling, as an alpha concept 9 months ago, it wasn’t as fleshed-out and strong as it is now. It wasn’t different enough and it wouldn’t have stood up to the scrutiny that it can face now.

If I would have gotten other people involved, all I would have accomplished was to take a few other people down the wrong path with me for a while. At least this way I spend my effort, and mine alone, to figure out where it needed to be.

What are the top traits and skills that are most important for an entrepreneur to possess? Curiosity, ambition and passion. A good bit of stoicism, thick skin and the desire to break rules, or at least stretch them as far as they’ll go, and the need to pursue something larger than themselves. And lastly, a little crazy.

When I’m having fun …

Ha ha! Honestly, I like to build brands and businesses for fun, but that makes me sound like a crazy person, so I won’t focus on that too much. I engage in these lifestyle experiments that help me see things from a different perspective. Sometimes they’re little things, like carrying a camera with me everywhere I go and sometimes big things like moving to a new country every 4 months, but I like to always have SOMETHING going on in my life that shakes the foundations a bit. I feel like I’m stagnating otherwise.

I also like to read – a lot! I enjoy writing; meeting new people and creating stuff (e.g. drawings, paintings, eBooks, etc.). I practice yoga regularly when I can find a good spot in the city I’m living in, but otherwise I do this kind of prison-style workout, that I can do in super-small spaces, since that’s where I find myself sometimes.

My Daily Motivation Tips for Entrepreneurs

The knowledge that I have exactly one life to live. No do-overs, take-backs or extra-lives.

Three Books Every Entrep’ Should Own

“Start With Why” by Simon Sinek is an excellent read, and concisely explains one of the main points I tell my branding consultation clients about how to approach the branding process.

“Atlas Shrugged” is probably not for everyone, but I think there are parts of Ayn Rand’s philosophy, including objectivism, that most people can benefit from, including not living your life for other people.

And lastly, “The Personal MBA” by Josh Kaufman is an amazing resource. I’ve read hundreds of business books these past few years, but this guy has read them all and he gives you the main points from the most important ones, neatly summarized and put into context. I wish I would have had this book a long time ago – it would have saved me a lot of reading time. 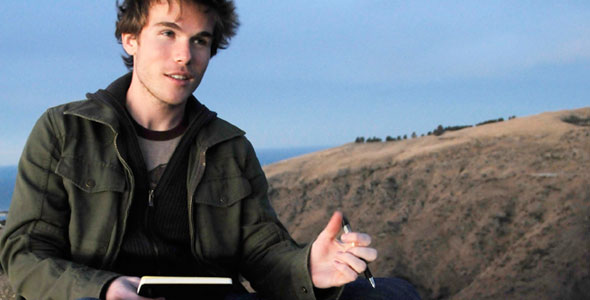