Learn how David Roman launched Socialinkd with no prior programming experience and why entrepreneurs should be patient and never settle.

If you meet someone at a local pub and want to quickly connect via Facebook it could become a hassle. What about the new lead on a business partnership that came about from a person that you met at a dinner party the other night? Did you forget to get their contact information? Good luck connecting anytime soon. Tech entrepreneur David Roman, the Founder of Socialinkd realized that these “missed connections” were occurring all too often.

“Many people prefer connecting with others through social media — exchanging phone numbers is becoming a thing of the past,” says Roman. “Which is cool … I had no problem with that, but the process of finding someone on Facebook was a bit of a hassle.” That’s when the young entrepreneur decided to develop Socialinkd a mobile app that helps you instantly connect with a person you just met — by downloading the app and synching your smartphones

Learn how David Roman launched Socialinkd with no prior programming experience and why entrepreneurs should be patient and never settle.

If I told you that social media is the greatest revolution of our generation, many of you would respond nonchalantly as if I’m telling you nothing new.

It’s no secret that social media has completely changed the way we communicate. This became apparent to me one night while my buddy and I were out grabbing a drink. Conversation began to flow with this cute girl (I’m not trying to come across as arrogant here) and she seemed nterested in me. We continued to talk throughout the night and as we said our goodbyes she gave me her Facebook username rather than her phone number. This means one of two things — I blew it (she was in fact not interested) or she preferred to connect on Facebook. Regardless, I found it interesting.

A couple of weeks later, on a separate occasion, I was out with a group of people — the majority of which were meeting each other for the first time. And throughout the night I realized everyone was trying to connect on Facebook rather than exchange numbers. It was my “Aha!” moment. Many people prefer connecting with others through social media — exchanging phone numbers is becoming a thing of the past. Which is cool … I had no problem with that, but the process of finding someone on Facebook was a bit of a hassle. That’s where the idea for Socialinkd came from.

With Socialinkd, users can download the app and log in with Facebook credentials, which automatically syncs a QR code to your profile. So when you meet someone, open the app, select display code (while the other person does the same, but selects scan code) hold your phones above each other and a Facebook friend request is sent right on the spot.

Once scanned, you’ll see a funny ice breaker to ease the moment and than if you happen to have any mutual friends or any common interests or likes on Facebook, they are all shown in the effort to help encourage conversation. We just launched on the iPhone and Android and will soon be implementing Twitter and LinkedIn, all of which will be done through QR codes.

We want to be the brand tied to QR codes and be responsible for taking them mainstream. We feel that QR codes aren’t as mainstream as they could be because of the way they are marketed — they are essentially faceless. Perhaps if there was a brand tied to them and used in a way that would bring convenience to the consumer, the chance of mainstream adoption would be higher. We want to be that brand therefore we will continue to use QR codes in creative ways that will bring convenience. Meaning, there is more to come from us! 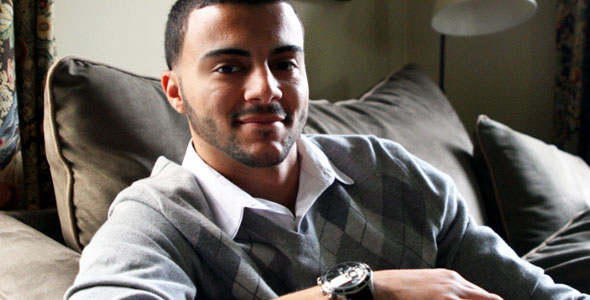