Ahoy Mates! Would You Build a Startup from a Ship?

Would you consider building your startup at sea?

Would you consider building your startup at sea?

The Maritol, Blueseed and other startup community’s have decided to sail the deep blue, some outside of U.S. jurisdiction — hoping to make the future of startup ships a more burgeoning reality.

The ship, called The Maritol, has an interesting history. It began in the early 2000’s when the Icelandic ice-breaker was bought by an architect turned millionaire and renovated into accommodations. But soon the idea of living in a ship lost its luster. In 2011 The Maritol was sold to a group of businessmen who then decided to turn her into a platform for startups.

According to Forbes writer Rakesh Sharma, “Part incubator and part community space, The Maritol … houses The Icebreaker, as the incubator is known.” It functions as a community of sorts with journalists, marketing professionals, and hardware entrepreneurs as part of its “crew”. Today The Icebreaker hosts over a dozen startups on board the ship.

Building a Startup, on a Ship?

Many startups may wonder, “Why would you want to build your startup on a ship?” First, there’s a unique working atmosphere on a ship. Unlike office buildings, where offices are created to separate people from each other, on board of The Maritol people work in close proximity to each other which has been said to stimulate creativity.

Also, for many startups it’s all about location, location, location. The novelty of The Maritol is undoubtedly its proximity to Silicon Valley, which provides a constant flow of interesting, active and useful startup ecosystem.

The idea of working from the sea seems perfect, but like any startup story the reality can be harsh. The owners of the ship, Brewster Kahle, founder of the Internet Archive, and Creon Levit, a project manager at NASA Ames Research Center, have not moved The Maritol “in more than two years, despite a regulation stipulating that ships can’t stay docked for “extended” periods,” according to Wall Street Journal reports.

Meanwhile, port officials insist “the port is reserved for functioning ships, not floating offices.” This Spring “they threatened to evict the Maritol from the pier unless, among other things, it completed a cruise around Alcatraz, the famous prison island in San Francisco Bay.”

While The Maritol’s  floating co-working space was a spontaneous project, Blueseed — a much larger and fully commercial project — is gaining traction. Blueseed a huge liner, with a 1500 person capacity, has plans to “float” 12 nautical miles from the San Francisco coast line.

According to Blueseed, “The ship will be converted into a coworking and co-living space, and will have high-speed Internet access and daily transportation to the mainland via ferry boat. So far, over 1500 entrepreneurs from 500 startups in 70+ countries have expressed interest in living on Blueseed.”

With an anticipated launch of late 2014, the liner will have its own crew, special zones for working and recreation, a good Internet connection, etc. Interestingly enough, all of their amenities will cost much less than office in San Francisco, given the ship is located right outside U.S. borders and territorial waters. This allows Blueseed inhabitants to build startups without a U.S. work visa. Meanwhile, the proximity to Silicon Valley provides wonderful opportunities for floating startups.

The Future of Open Sea Ventures

The future of floating office spaces remains dubious. For instance, startups that plan to occupy Blueseed — specifically non-Americans on the ship — will live under the constant risk of having their visas revoked, effectively stranding them in the Pacific. Meanwhile, occupants will enjoy liberal tax policies given, “Blueseed residents will have to ensure they comply with all laws, regulations, and tax liabilities that apply to them and their companies, given their legal residence in the country whose flag Blueseed will fly (Bahamas, Marshall Islands etc.).”

Meanwhile, in efforts to salvage their efforts, The Maritol plans to set sail this winter, weather permitting. And Blueseed will only become a reality if it manages to raise the $27 million needed to “set sail.” To date, the venture must raise $18M to secure its anticipated launch. 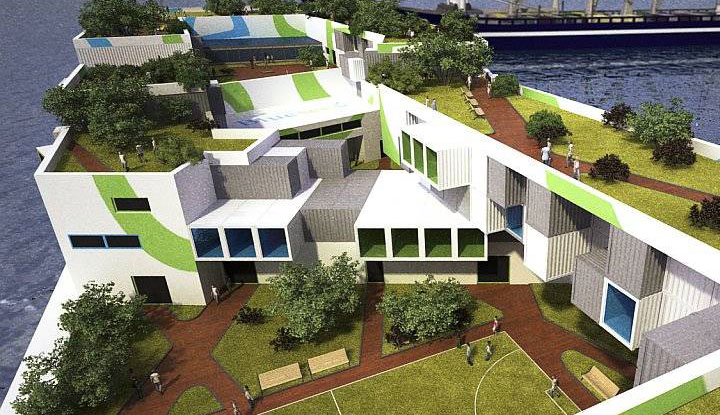