Should I Launch My Business with a Co-founder?

I hate to be the bearer of bad news, but it will not be possible to clone yourself during your lifetime. Major bummer, right? So it may be...

I hate to be the bearer of bad news, but it will not be possible to clone yourself during your lifetime. Major bummer, right? That means uttering, “If only there were two of me, I could get this done so much faster!” under your breath is never going to be a viable solution for getting something done, no matter how much you want it to happen. This includes starting a business. I’m sorry.

With that cold hard truth behind us, let’s talk about an alternative. If it’s physically impossible to be in two places at the same time, what’s the next best thing? As I pondered this question while trying to decide whether or not to leave my secure, well-paying corporate job to start my own company, I began to consider enlisting the help of a partner in crime.

How I Found (and Pitched) My Co-founder

There is no shortage of stories on co-founders. For every horror story about a business partnership gone awry, there are glowing commentaries about perfect, made-in-heaven matches that joined forces to conquer the world. Don’t believe me? Do a Google search. There are thousands of thought leaders arguing passionately on both sides of the issue. As with most things in life, the truth can probably be found somewhere in the middle.

For me, the decision to start ‘ZinePak with a co-founder came down to the simple fact that I thought it would be more enjoyable with someone else. I knew that the company— which creates custom publications for celebrities, brands and VIP-style ticketing for special events — would likely start out as a home-based business with freelance partners. I didn’t like the idea of being isolated.

My co-founder Kim Kaupe and I were co-workers at an advertising agency. Although we didn’t know each other all that well, I enjoyed working with her and thought our complementary skills (my background was in entertainment and hers was in magazine publishing) would benefit the business. When I told her about ‘ZinePak, I positioned it as a soft pitch.

“I’m planning on doing this new thing,” I said. “I think it’s going to be a lot more fun than what I’m doing here. You’d be really great at it, too. What do you think?”

A few days later she said, “About that thing you’re doing. It sounds pretty cool. I’m in.” That night we went to Starbucks after work and sketched out an idea of what the company would look like. How much capital would we need? How would we get customers? How would we get vendors? Did we need employees right away?

We made our best guesses to each question and decided we would figure the rest out along the way. We agreed on an equity split, did a Google search to determine what corporate structure was most appropriate, and set up email addresses at our shiny new domain name. And with that, our business partnership was solidified.

Could Kim and I have spent months formalizing a 60-page partnership agreement and trying to map out every single hypothetical for the next twenty years? Of course. But we focused that energy on building an amazing company instead. We still don’t have a full-executed partnership agreement. We’ll probably get around to it one day, but in the meantime, we both trust each other to do the right thing.

The Benefits of Co-founder Teams

Although I don’t have children, I imagine that starting a company alone must be something like being a single parent. In the early stages of a business, a startup requires almost around-the-clock attention. I didn’t get seven consecutive hours of sleep in the first 18 months of ‘ZinePak. The sleep I did get was filled with dreams (and sometimes cold-sweat-inducing nightmares!) about the work awaiting me in the morning.

The same way parents divide the responsibilities of raising a child and celebrate milestones together, co-founders can divvy up the workload and share in the accomplishments of their growing company. (We like to joke that ‘ZinePak is out of the toddler stage and onto the pre-school stage. Top of the class, naturally!) The benefits to this approach are many:

I encourage all would-be founders to look for a partner to take the wild ride of entrepreneurship with. No one but your co-founder — not your spouse, roommate, investors, or employees — will understand the experiences you have or the impact they have on you, both personally and professionally. Just like an awesome roller coaster is more fun if you’ve got a friend sitting next to you, starting a business with a partner can mean twice the excitement, creativity, enjoyment, and reward.

Brittany Hodak is the co-founder of ZinePak, a custom publication company that creates fan packages for entertainers, brands, and athletes. She holds an M.S. in Marketing from CUNY Baruch’s Zicklin School of Business and a B.A in Public Relations from the University of Central Arkansas. In 2010, she was named to Billboard’s 30 Under 30 List. More recently, she and her co-founder Kim Kaupe were named to Advertising Age’s 2013 40 Under 40 List. 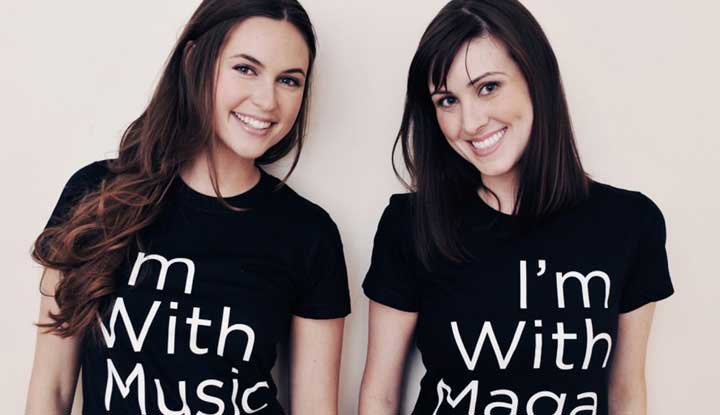