What Small Businesses Can Learn from Red Rover

Red Rover, Red Rover, send a ‘winner’ right over. Growing up, we were all pretty familiar with the Red Rover chant heard on school yards. The game was...

Red Rover, Red Rover, send a ‘winner’ right over. Growing up, we were all pretty familiar with the Red Rover chant heard on school yards. The game was pretty simple. Each team sets up two imaginary lines facing each other. The players link up along one of these lines, and the game starts when the first team calls out, “Red rover, red rover, send [name of player on opposite team] right over.” The immediate goal for the person called is to run to the other line and break the chain [formed by the linking of hands].

If the person called fails to break the chain, this player joins the team which called “Red rover”. However, if the player successfully breaks the chain, this player may select either of the two “links” broken by the successful run, and send them to join the team that had been called out. This process continues until only one player is left on a team, they must try and break through a link. If they do not succeed, the opposing team wins. It’s a lesson learned in risk management and successful business practice.

That is the name of the entrepreneurship game plan – risk, reward and opposition. It parallels with much of what becomes instinctual ‘survival of the fittest’ mentality as you start a fledgling company and grow it from bottom-up. In order to become successful you have to realize that challenges and opposition will present themselves. The end goal is to quickly learn agility — take stumbling blocks and turn them into stepping stones. Challenges are intended to slow you down and generally come through people, finances, emotions, etc. What we fail to realize is that ‘perfect storms’ will catapult businesses into unheard of success – presenting opportunities and forcing creativity through lean times.

Fresh out of college, I was on a plane from New York and met a very successful CEO/Founder of a well known restaurant chain. At the time I was just thinking about starting my own business and I asked him, “What is the number one piece of advice you give individuals looking to start their own businesses?” He replied, “Get an exit strategy.” In other words – expect to succeed & plan to fail. Along the way, this advice has reaped huge benefits because when setbacks occur (and they will) – you have calculated the risk necessary to move forward or cut your losses. What you’ll find time and again – it’s the perfect storms, calculated risks and challenges that propel your business forward.

So, don’t hunker down in adversity – it strengthens character. Make your position in business unassailable by expecting challenges and formulating a game plan to conquer them when they come. Lastly realize the depth of your own ignorance during a perfect storm, “what the caterpillar calls the end of the world, the master calls a butterfly.”

Take a look at several well known companies that were birthed out of perfect storms:

• FedEx Corp. began operations on April 17, 1973 as Federal Express, a nod to the Federal Reserve, with whom founder Frederick W. Smith had hoped to get a contract. He didn’t, but the company that delivered 186 packages to 25 cities on its first night of operations now manages more than 7.5 million shipments everyday worldwide.

• Trader Joe’s started as a chain of convenience stores called Pronto Markets in the slow financial times of 1958. In 1967, the company changed its name to Trader Joe’s and began to carry unique grocery items under its own brand. The company now operates more than 280 stores in the U.S.

• HP (Hewlett-Packard Development Company LP) was inauspiciously born in a Palo Alto garage at the end of the Great Depression. The electronic company, initially supported by a mere $538 investment, has grown into the first technology business to exceed $100 billion in revenue, earning $104 billion in 2007. It now operates in nearly every country in the world.

• When Alexander Graham Bell invented the telephone in 1876, it did not ring off the hook with calls from potential backers. After making a demonstration call, President Rutherford Hayes said, “That’s an amazing invention, but who would ever want to use one of them?”

• In the 1940s, another young inventor named Chester Carlson took his idea to 20 corporations, including some of the biggest in the country. They all turned him down. In 1947 – after seven long years of rejections! – he finally got a tiny company in Rochester, New York, the Haloid company, to purchase the rights to his invention – an electrostatic paper-copying process. Haloid became Xerox Corporation we know today. 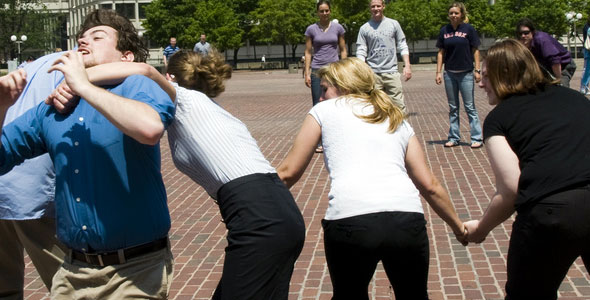