Learn how Brian Wong’s impromptu departure from Digg, set him on a path to deliver joy via virtual gaming with real prizes and revolutionize the in-game rewards experience.

“Opportunity presents itself to you — often masquerading as failure.”

Canadian born entrepreneur Brian Wong, skipped four grades and finished college when he was 18. But that was only the beginning.

A year later, in 2010 19 year-old Wong was laid off from his first “real” job at Digg.  The devastating turn of events soon led him to an idea – which would land him $200,000 in venture funding from True Ventures, to back Kiip (pronounced “keep”) his new mobile gaming ad model that was destined to quietly disrupt in-game mobile advertising.

Fast forward to 2011 and twenty-something Wong had turned “child’s play” into big business. Last year, after announcing a $4 million Series A round lead by Omniture investor Hummer Winblad, the fledgling rewards network is on a path of mobile gaming domination – one user experience at a time.

Kiip’s mobile advertising platform seeks to bridge the mobile and gaming worlds and deliver value to game developers and advertisers by enhancing monetization opportunities for developers and maximize user engagement for brands. “… There has not been an ad network so far that leverages game mechanics to engage users at the same time,” says Wong (techcrunch.com).

His goal? To enhance gaming “achievement moments” – for developers and marketers alike.

Learn how Brian Wong’s impromptu departure from Digg, set him on a path to deliver joy via virtual gaming with real prizes and revolutionize the in-game rewards experience.

I landed my first “real” job at Digg after college, but reality hit hard when I got laid off after only a few months. But if it wasn’t for this seemingly unfortunate event, I never would have had the opportunity to think up and start Kiip.

The idea started forming, strangely enough, when I was on a plane, and I looked around and realized that a number of people were playing games on their mobile phones and tablets during the flight.

Every day the number of people who have mobile devices is only increasing, and most all of them play mobile games — which translates into a captive, engaged audience that, at the time when I formed this idea, there was no way an advertiser or brand could really reach a user without disrupting their game play in an intrusive way.

So I started thinking about game play and game mechanics, and realized that there were these organic moments of emotion and excitement in a game that could be tapped into without annoying or disrupting people.

I started sharing my idea for Kiip with people I knew and respected, and eventually I found myself in meetings and getting funding. It was an idea I believed in — revolutionizing in-game mobile advertising with a model based on “achievement moments.”

Now Kiip gives gamers real rewards from well-known brands in return for their virtual gaming accomplishments, such as reaching a high-score or “leveling up.” 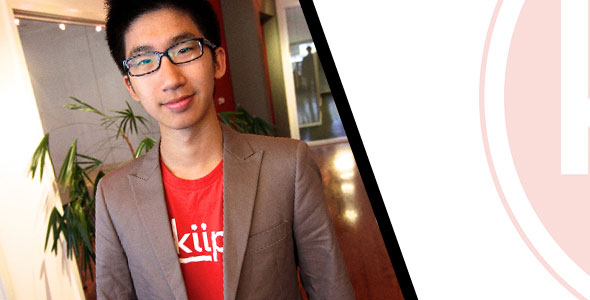 How to Start and Grow a Profitable SaaS Company