Here are four lessons that every small business owner can medal in – starting today!

Would you leave everything you know behind and trek 1,000 miles to a new city and dedicate the next two years to the pursuit of your passion? One young Olympic hopeful did.

Was it worth it? Just ask sixteen year-old Gabrielle (Gabby) Douglas. Fast forward two years later to the 2012 Summer Olympic Games, and Douglas has made history.

“Douglas led from the start and never gave up the lead,” according to TIME Magazine’s Alice Park. “The young Olympic gold medalist with the U.S. women’s gymnastics team earned the all-around title as well, becoming the first African American to do so and the first U.S. gymnast to claim both the team and all-around gold medals in a single Games.”

What can entrepreneurs learn from this young Olympian’s journey to gold? Here are four lessons that every small business owner can medal in – starting today!

Douglas’ coach, Liang Chow, acknowledged that “many people worried about (Gabrielle’s) mental toughness … But (today) she demonstrated that she can handle it, that she can handle the toughest job. It was a wonderful performance under huge pressure for a 16-year-old.”

Is mental toughness important for success? Veteran startup mentor Marty Zwilling believes so, “In sports, mental toughness is defined as the ability to focus on and execute solutions, especially in the face of adversity,” says Zwilling. In business you must “Prepare mentally every day. Your mind can be strengthened … just like a muscle. Complete a mental workout every day to dramatically improve your focus and ability to execute consistently.”

2. When people have doubts, make them believers.

“Physically, yes, she was prepared. We all knew that,” says Martha Karolyi, the U.S. national team coordinator. “But lots of people had a question mark … She had such a great improvement, it’s incredible in such a short time. I haven’t seen any gymnast go from an average good gymnast five months ago to climb up to be the best in the world. That’s the truth.”

The same skepticism is often felt by breakout entrepreneurs.

While some may admire your natural talent or skills, they may not believe that you have what it takes to go from good to great at mach speed. It’s evident, even at Olympic competitive levels, that people will doubt your resolve and abilities. But never let another person’s doubt become the judge and jury of your future success.

Instead, embrace skeptics and turn them into believers by taking “what’s simple, impossible and insane and make it tangible.” 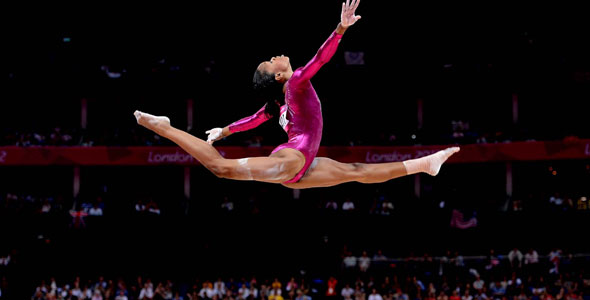