Internet Sales Tax: Does it Hurt or Help Small Business? Senate to Weigh in This Week

Prev1 of 2NextUse your ← → (arrow) keys to browse Online sales are soaring. State budget deficits are growing. And tax-free Internet sales are center-stage amongst the debate....

Online sales are soaring. State budget deficits are growing. And tax-free Internet sales are center-stage amongst the debate.

As many small business owners now know, “Congress [has addressed] bills that would “level the playing field’ by allowing states to require all online merchants doing business in that state to collect sales tax. Web retailers have largely had a free ride since 1992 …”

Currently states generally can collect sales tax from retailers only if they have a physical presence, such as a store or a warehouse, within the state’s borders.

After winning an enthusiastic endorsement from President Obama, “the Senate on Monday moved forward on legislation giving states more authority to collect sales tax on transactions made over the Internet, which would level the playing field for online and offline businesses — but it could also pose major challenges for small merchants who sell across the state lines,” according to a recent Washington Post article.

Congressional newspaper, The Hill asserts that, “major retailers are putting all their lobbying muscle behind the legislation, arguing it would close an unfair loophole that benefits online merchants over brick-and-mortar stores. The National Retail Federation, which represents chains such as Macy’s, and the Retail Industry Leaders Association (RILA), which counts Target and others among its membership, announced it would score lawmakers’ votes.”

Rachelle Bernstein, a vice president with the National Retail Federation asserts that “tax laws must be applied equally, whether a customer goes to a store, shops on their computer or orders from a catalog by telephone. Otherwise, she argues, the government is giving ‘a tax advantage’ to one type of business over another.”

“I used to think that charging [online] sales tax was a bad thing, and have now changed my mind.  I now support a fair tax approach to Internet transactions.  As a small business owner who has worked on the Economic Development Taskforce of my hometown of Enumclaw, WA, I have seen first-hand how small cities and municipalities, the people who provide our first responder and most critical social services, are in need of predictable tax revenues,” said Hechter.

“Consumers should pay their fair share of taxes to ensure that the local governments have adequate resources to fund schools, police, fire departments, and more; the technology has caught up with the needs of e-commerce operators, so there shouldn’t be any reason why a savvy online retailer can’t easily implement a solution,” he further comments.

But is it really fair?

Deirdre Shesgreen, of the Gannett Washington Bureau writes, “Consumers used to saving money by not paying sales tax on online purchases may not have that advantage much longer as momentum grows for legislation allowing states to collect taxes on Internet sales.”

Sen. Kelly Ayotte of New Hampshire argued during an earlier Senate debate, that “what this does is force the Internet marketplace and online businesses to become tax collectors … It is the long arm of the federal government punishing states such as mine that don’t have a sales tax.” 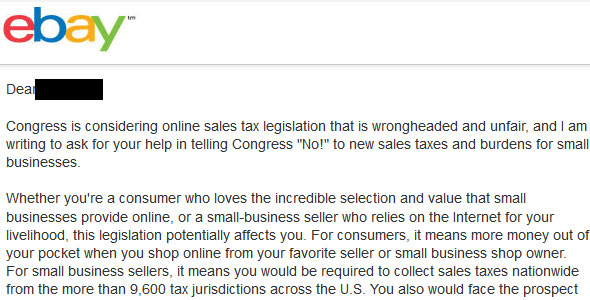