J.C. Penny, Mountain Dew and Other Brand Controversy: Too Late to Apologize

Have you noticed that a number of brands are profusely apologizing lately? “For what?” you might ask. It’s been a tough year for marketers that have courted controversy...

Have you noticed that a number of brands are profusely apologizing lately?

It’s been a tough year for marketers that have courted controversy – in search of ways to reconnect, relate and build credibility with consumers.

J.C. Penney is still on the offensive, apologizing to shoppers alienated by exiled CEO Ron Johnson, former Apple alum, after the company oversaw a $4 billion loss in revenue in his brief tenure – losses tied to Johnson’s controversial store revamps.

Customers didn’t quite appreciate Johnson’s Apple-inspired vision of Denim Bars to help J.C. Penney shoppers find the perfect jeans, (not unlike Apple’s Genius Bars) or iPod Touch toting employees offering to ring up purchases and search for sizes or styles on the company website upon request.

In response the struggling department store operator launched a new television commercial that began airing this May, admitting that it made mistakes.

Mountain Dew found itself between a rock and a “seemingly racist” hard place after releasing an online video by rapper Tyler, The Creator that was described as “arguably the most racist commercial in history,” and then this week the company found itself in yet another storm of controversy, prompting it to cancel a multi-million dollar endorsement deal with rapper Lil Wayne over profane and controversial lyrics. The soft drink brand produced and owned by PepsiCo released a statement assuring customers that they recognized the marketing misstep. “We apologize for the offensive video and take full responsibility. We have removed it from all Mountain Dew channels and Tyler has removed it from his channels as well,” according to the company website.

Domino’s Pizza continues to right wrongs as company executives decided to listen to the harsh criticism of their customers regarding the taste of their pizza.

Several years ago, the pizza delivery company released an ad campaign centered on proactive mea culpa messaging to acknowledge the problems with their product, followed by a promise to improve quality. Today they are still on a mission to retool their image by revamping their speedy pizza delivery claims and instead promote a slowdown, specifically thanks to the preparation of its pan pizzas.

While in the grand scheme of things these marketing mishaps, brand fails and endorsement deals gone awry were not catastrophic, they have unveiled a prevailing tone of today’s marketplace, resembling OneRepublic’s breakout hit, “Apologize.”

Mea Culpa Marketing, Soon to Be All the Rage

When things go pear-shaped the result is a lot of unhappy customers. And truthfully all businesses, both large and small, make mistakes. For example, “When someone buys your product or service and finds it falls below their expectations, their disappointment may even lead them to become angry. But not everyone deals with that disappointment and anger in the same way,” according to business writer Jodie Redmond. 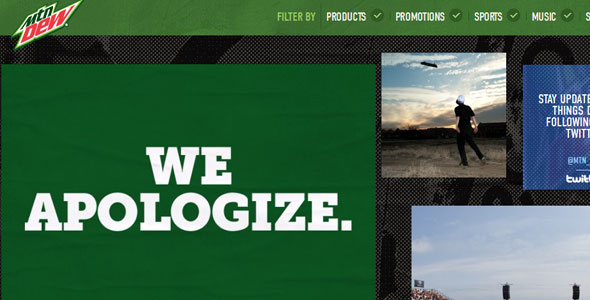