Learn how Ryan Rzepecki aims to make the international appeal of bike sharing a U.S. way of life and why he believes you must find a business idea...

“Though bicycle sharing has been around since at least the 1960s, Paris’s Vélib, one of the world’s largest programs, really spearheaded the trend when it became an overnight success in 2007. The French capital has roughly 28,000 bikes at 1,800 stations,” according to the International Business Times. Today, it is a a global trend that is gaining traction in the United States.

“Modern bike sharing programs—large fleets of bicycles designed for low-cost, short-term use and made available at closely spaced rental stations—have the potential to transform American cities,” according to Bikes Belong research and “During the past decade, many Europeans cities have successfully implemented large-scale bike share systems, and now U.S. cities are following.”

Fodors journalist Trish Friesen explains, “Bikes are hot right now … It’s true, North America [has] been a little slow to shift gears from four wheels to two, but the trend toward more densified, liveable cities has spurred a peddle-pumping revolution in major centers …”

Bike sharing is good for cities in many ways. It delivers all the benefits of bicycling: by replacing car trips, it helps the environment, road congestion, the economy, parking, mobility, and traffic safety. – Source: Bikesbelong.org

After working at the New York City Department of Transportation in Bike Planning, and through his travels, Ryan Rzepecki realized first-hand the potential of bike sharing in the U.S. In 2010, he founded Social Bicycles — a bike share technology that allows people to rent bikes online or on a mobile device, ride the bike around the city, and return it to a designated bike rack.

Rzepecki, the founder and CEO of Social Bicycles recalls, “I wanted this type of system to exist, but at the time I didn’t really know much about technology and product development.”

Today Rzepecki has turned his initial business challenge into a solution that differentiates their offering through technology.

“What we’ve done is put all the technology onto the bike itself, Rzepecki explained. “We make a bike that has an on-board computer with GPS and mobile communications and an integrated lock that works with regular bike racks. We make smart bikes instead of having smart racks,” he said.

Bike sharing has experienced slow adoption here in the United States, but Rzepecki believes that with infrastructure improvements and new perspectives, there is mainstream potential. “There’s a perception in this country that a bike is for recreation or it’s something kids do,” Rzepecki said.

“One of the reasons why I started [Social Bicycles] is that I’ve been to places where people really bike for transportation; where 40-50% of all trips are made by a bicycle. I find it to be such a really liberating way to travel; a convenient way to travel. If you haven’t tried riding a bike, in a city for that type of trip then it’s a great time to [start].”

Learn how Ryan Rzepecki aims to make the international appeal of bike sharing a U.S. way of life and why he believes you must find a business idea that you really love.

The bike share concept began over in Europe as this system of bikes throughout a city.  You can take a bike from one location, ride it around and drop it off in another. It’s really using bikes the way you would a taxi or public transportation.

This concept was popularized in Paris, France. They launched 20,000 bikes there and it instantly became a new form of public transportation. In the United States the system started popping up over the last couple years, but they’re all dependent on large docking stations and automated kiosks where you park the bikes; which require a lot of infrastructure given they take up a lot of public space.

I have a background (i.e. Master’s degree) in urban planning. I worked for a year at the New York City Department of Transportation in the Bike Planning Group — the group that installs bike lanes, bike racks and bike maps. So I’ve been in the transportation and planning industry for a while.

I had the idea [to start Social Bicycles] because I wanted this type of system to exist, but at the time I didn’t really know much about technology and product development. I was always a fan of technology and I read a lot, but I never had actually built something. So I had to piece together, over the years, the team that could go out and build [my idea].

We’ve been prototyping and making changes and iterations for several years (to the point where we are now) — where we have our own custom bike that we produce. The bike lock is welded to the bike frame in a very secure way. We hired a small design prototyping firm to do the first prototype, a stand-alone lock box that would attach to a regular bike. We got our first prototypes within 6-7 months and it was great, but we realized that wasn’t going to be secure enough. It didn’t look particularly nice and so we really needed to go a step further and develop our own bike and integrate these parts into the bike itself.

Today Social Bicycles offers their members affordable bike share technology and the opportunity to find bikes at hub locations and reserve them from the web, a mobile app, or directly from the bike itself. 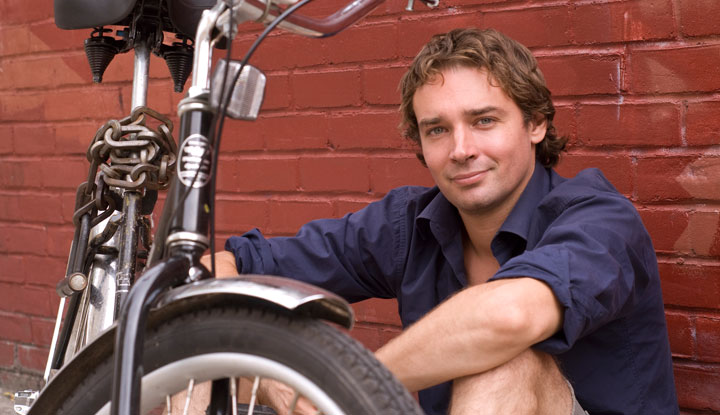