Op-Ed: When It Comes to Entrepreneurship, Grab the Bull by the Horns!

Lots of people aren't ready to walk away from it all. As unhappy as they are "trying to stay on the bull", they're terrified by the thought of...

Have you ever watched a rodeo? The bull bucks so violently that it’s considered a major feat for a rider to stay on for eight seconds. That doesn’t seem like very much time until you actually think about being thrown around by an angry animal that weighs close to a ton!

[pullquote]”The choice I made is what separates entrepreneurs from ‘regular people’. I decided to grab the bull by the horns and start my own business. This wasn’t a decision I came to in an instant, mind you. After all, I had invested years and years of my life (not to mention a college degree) in the news business. Was I really willing to walk away from it all?”[/pullquote]During my last year in the TV news business, I felt like one of those bull riders. Because of layoffs and budget cuts caused by the Great Recession, I was responsible for doing work that had once been done by five separate people. It was all I could do to “hold on to the bull” for a 10-hour shift!

Unfortunately, things weren’t any better at other stations. Salaries were plummeting, and hiring freezes were becoming much more common. So, I had a choice to make — I could stay where I was and try to ride it out, or I could grab the bull by the horns and go do something new.

The choice I made is what separates entrepreneurs from “regular people”. I decided to grab the bull by the horns and start my own business. This wasn’t a decision I came to in an instant, mind you. After all, I had invested years and years of my life (not to mention a college degree) in the news business. Was I really willing to walk away from it all?

Could You Walk Away From It All?

Lots of people aren’t ready to walk away from it all. As unhappy as they are “trying to stay on the bull”, they’re terrified by the thought of starting a business of their own. They can’t imagine a world without paid vacation time, a 401-K, and bad coffee in the company break room. As much as they may hate working for “The Man”, they take comfort in the fact that “The Man” offers a perceived safety net. After all, he gives them a paycheck every two weeks!

But, as you probably already know, entrepreneurs are a little different. Sure, you might be afraid to start your own business, but you believe it’s well worth the risk. After all, grabbing the bull by the horns means you get to take charge of your own life. You get to decide where, how, and when you work. You also get to decide who you work with. You never have to worry about an overbearing boss standing over your shoulder ever again.

That doesn’t mean grabbing the bull by the horns is easy, though!

When I left the news business, I had eight months until my lease was up. Since I wanted to move beyond the tiny one-bedroom apartment I was living in, that meant I had eight months to build a business that was strong enough to appease a new landlord.

I was lucky to be able to work from home, because that was overhead I didn’t have to worry about. However, the only space I had to work in was the built-in desk in the kitchen. The chair I had was a little too tall for the desk, so I had to sit with my knees up against my chest to fit. (I can only imagine how ridiculous I looked typing away with my head resting on my knees!)

Every time my feet fell asleep or my back started to ache, I thought of how nice it would be to sit at a real desk (with a chair that fit!) — and I kept plugging away. That’s what grabbing the bull by the horns means, after all.

Eight months later, I moved into a much bigger place. And I placed my real desk in front of a real window [with a view]!

It’s been four years since I sat in that cramped kitchen. To this day, I refuse to re-upholster the chair I sat in, because the two little dark marks where my feet pressed into the cushion for all of those months are a constant reminder of where I started and how far I’ve come.

How Will You Grab ‘the Bull’ By the Horns?

As your small business grows, the challenges don’t go away. They simply evolve. Instead of not having any clients, you may have a client who’s a real pain in the butt. Or, instead of not having money to hire employees, you may have trouble finding the right employees. In lieu of making no money, you may pull your hair out trying to figure out all of the tax responsibilities you have now that you’re turning a profit.

Sure, a successful business owner needs to be smart. You need to exude professionalism, even when doing so is really difficult. You’ve got to learn how to manage people — both customers and employees. But if you can’t grab the bull by the horns, all of these other wonderful qualities will eventually fall by the wayside.

After all, how can you truly succeed if you can’t take charge of any situation?

Nicole Beckett spent more than a decade telling stories and digging into issues as a TV news anchor and reporter. Today, she uses those same skills to create powerful content marketing strategies for her clients. As the President of Premier Content Source, Inc., Nicole has helped countless business owners create online success. Connect with @NicoleBeckett on Twitter. 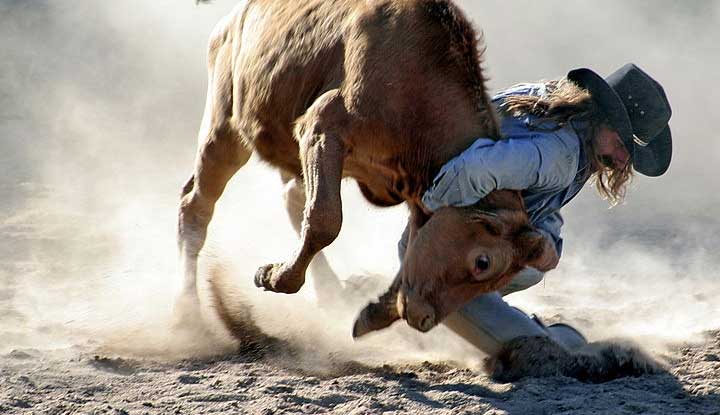 How to Become an Ethical Leader

Four Tips to Achieve Your Vision From Start To Finish