9 Virtues To Succeed In Life, Business And Football

I am a professional kicking coach and our camp’s theme for this season is ‘Never Settle’. I truly believe that if you are willing to put in 100%...

I’m a professional kicking coach. I’ve trained football kickers and punters for over 10 years and coached over 3,000 students through world-wide camps and private lessons.

Here’s a look at nine powerful lessons I’ve learned along the way, virtues that will take you far in life, business and football.

Our camp’s theme for this season is ‘Never Settle’. I truly believe that if you are willing to put in 100% and demand more from yourself, and never accept average work; that your path to success (in whatever you embark on) increases ten fold.

Accepting average work has become somewhat of a norm with today’s society. I’m not sure how or why this happened, but it really frightens me. My parents, teachers and coaches have always encouraged me to give it my all, don’t stop until you reach your goal, and keep going! You must work almost maniacally sometimes to achieve lofty goals.

Few athletes turn Pro each year and less than 1% of the nation are millionaires. It’s not because they have super human abilities.  More times than not, it’s because their work ethic and commitment to their craft is unimaginable to the average person.

“When you want to succeed as bad as you want to breathe, then you’ll be successful.” – Eric Thomas Tweet This

Think about that. Wow! If you’re a hard worker, you may hear things like – “Man, you work too hard, take it easy for once.” Or, “You spend too much time doing ____, you really should take it easy.” Unfortunately, the people making those remarks rarely understand just how bad you want it and what it takes to be excellent.

If you’re getting negative feedback from people around you about your work ethic and commitment to your craft, take it as a compliment. It means you are truly putting in the time and are legitimately passionate and serious about making your dreams become a reality.

2. Always follow-through on your commitments.

This is the most sacred principal in life. Your integrity, or lack there of, is largely determined by your reliability, follow-through and commitment to “do what you say, and say what you do.”

Over the last decade I have noticed a large shift (and society’s acceptance) of flaky people, those who makes plans, but don’t follow through on them. This is not acceptable. It is very rude to the other party and in general, a poor character trait to possess.

I understand that sometimes things are out of your control and you truly cannot meet an obligation. In those situations, you need to do your best to make it right. Always give a courtesy heads up as soon as you know plans have changed.

Remember, there is someone else on the other end who probably set out their time for you . . . relying on you to be there. Your bail-out could cost them time, money or embarrassment if others were relying on them too.

Remedy this by making it right. A blanket apology and being done with it is not enough. Instead, give a sincere apology and make a real effort to find some resolve for the other person that you let down. Do your absolute best to not make flaky behavior a habit in your life.

As a business owner, making it right could mean offering a partial refund for a botched experience. As a spouse or in a dating relationship, an “I owe you a better date next week” may suffice. As a player on a team – “Coach, I’m so sorry for missing practice, I’ll volunteer to stay late this week to help with whatever the team needs,” is the best method.

Being a flake is a sure way for people to distance themselves from you and lose trust in you. A trend of unreliability and lack of follow-through will kill your relationships and any sort of bonds you are trying to forge. Your accountability in life and dealings with people will either make or break you.

3. Stay loyal to those who help you.

Too many talking heads in your life is a sure way to confuse yourself and never establish a firm direction. Investing your time and commitment with 1 or 2 experts in your industry is a much better way to go.

Don’t be one of those people who uses others and leverages relationships instead of having meaningful ones for the right reasons. Strive to establish relationships with a mutual respect, instead of a “What’s in it for me?!” mentality.

Seek relationships of a full throttle experience from people who really care about you and want to help you because you’ve mutually earned each other’s respect. If you stay loyal, the other person will go to war for you.

4. Treat others with respect.

In the Bible, it says, “Do unto others as you would have them do unto you.” This has come to be known as the Golden Rule. It’s a very powerful proverb and whether you’re religious or not, just think about what it means.

Treat others how you want to be treated. If you want people to respect you, you must also reflect that same positivity, sincerity and respect toward others. If you start thinking – “How would I feel if someone talked to me that way?” it will help shape how you approach situations and interact with people. A good book to read on this subject matter is How to Win Friends & Influence People by Dale Carnegie.

I’ve never understood the purpose of putting up a front or crafting an illusion. Just give it to me straight. I’m not advocating rudeness, however. I feel transparency is essential to not only alleviate confusion, but in being authentic with others.

It drives me nuts when people can’t give a straight answer; dancing around a subject like a politician or being overly diplomatic. Never be afraid to have an opinion.

Have a personality and be yourself. Never pretend to be something that someone else wants. Honesty definitely hurts sometimes, but in the end you can hold your head up high knowing you either lost by being true to yourself, or even better, won for the right reason without manipulation.

6. Communicate with clarity and professionalism.

While today’s technology is remarkable, many negatives have occurred because of the “always on” lifestyle and various short form (e.g., Text, Twitter, Snapchat, etc.) methods of communication we’ve all come to know.

Knowing how to properly communicate with poise, precision and clarity can help you stand out from the crowd. Text like e-mails, one-liner responses, vague statements; all of these are a no go! Having to interpret what you’re saying is like a novice attempting to uncover the meaning of ancient hieroglyphics.

Not checking and fixing spelling and grammar errors before firing off a business proposal is simply unprofessional. Not understanding the difference between their and they’re, were and we’re, etc. does not earn you points.

Your ability to summarize your thoughts and write clear-cut next steps and action plans is a very powerful asset in all forms of communication and dealings with people.

Being able to respond intelligently shows you can handle your own. Many people don’t realize this, but you’re always “on” in most professional scenarios. While it’s perhaps not the nicest thing, most people are judging you every step of the way. Life is a constant interview.

It’s easy to make an excuse. Very few people are willing to own up to their mistakes and find a remedy. It takes more time and more effort to find a solution than it does to just blame someone or something else.

Don’t blame other people, own up to your mistake, and even if it’s not your mistake, don’t throw others under the bus. Work hard to find a solution and don’t take the easy way out and finger point. It’s very cowardly to not take ownership over a foul-up.

What’s remarkable about how humans work is that if you really mess up something, sometimes the way you handle a situation (when positively/proactively) can actually win you more points, versus if everything just went smoothly from the get go.

Handling controversy and the ability to problem solve instead of running away from problems is a sign of a capable person with strong character.

8. Give back and help others.

No matter how little you have to give, it’s always a heartfelt and appreciated gesture. Doing something just to do it out of sincerity (not because you want something in return or because you want to be seen in public as a good person) is the only way to do it.

Whether it’s a charitable donation, volunteer work, giving back your time to coach younger players, or mentoring someone who is following in your foot steps; just do it. Your reward is the feeling you get from seeing someone else smile and by impacting their life positively. Some of life’s greatest pleasures are derived from the simplest of gestures.

9. Get better than yesterday.

My high school football head Coach Dan Duddy, on his way out to practice every day, would say loud and proud ‘Let’s Get Better Today!’ Almost 20 years later, it is still stuck in my head.

What’s the point of practice? To get better. If you’re out there putting in all this time and effort, you better be darn sure that you are making yourself and everyone around you better. If not, you’re just going through the motions and wasting everyone’s time –including yours.

Always improve yourself and strive for more.

Coach Brent Grablachoff, founder of Kicking World, is one of the top professional kicking coaches in the world. He has been training football kickers & punters for over 10 years and has coached over 3,000 students through his world-wide camps and private lessons. Before launching Kicking World, he held positions at Fortune 500 companies in sales & marketing at Merrill Lynch, CDW & Honda, as well as 2 tech start-ups. He is an entrepreneur and tech enthusiast and has authored and published a book and DVD on kicking, as well as created an iOS and Android App. Connect with @kickingworld on Twitter. 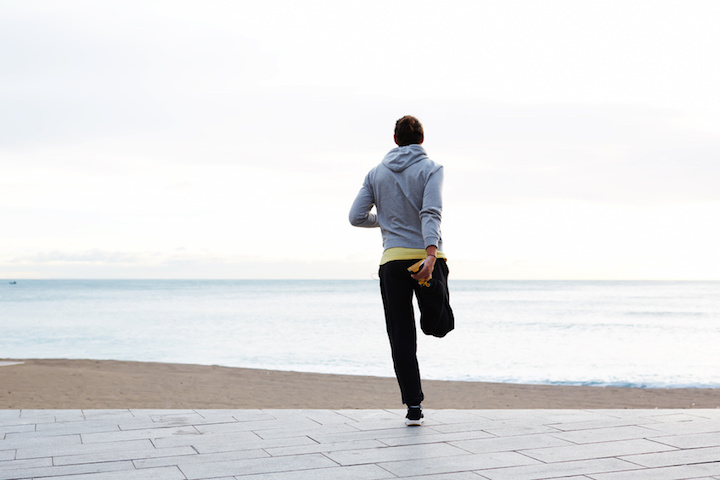