How To Master The Art Of Conversation In Business

Conversations matter. They are the life blood of business relationships.

Conversations matter. They are the life blood of business relationships. In fact, it’s more than that.

Somebody who understands the give and take of conversation and is skilled at the thrust and parry of a good discussion will do well in the business world. They’ll find that other people enjoy their company and that they enjoy the company of others.

And for that reason, it is important to become a good conversationalist.

But can you become better at it? In a word, yes. If you’re one of those people who believes that you’re either born witty or cursed to always be a step behind, let me tell you that that is not the case. You can learn to become better. You just have to know what to pay attention to.

And that’s what we’re going to cover here. Below I’ve outlined some of the most important keys of a good conversation.

The first thing you’ve got to understand is that conversation isn’t just the words you speak. If that’s your belief, then you’re taking a far too narrow view of how a conversation works. That’s like saying a car is the engine, or a cat is its purr.

We’re going to explore all of these points in more depth in a second, but what matters at this point is that all of these aspects count to decide how good a conversationalist you are as they’re all grouped into a holistic scale that ranges from ‘good’ to ‘bad’.

Do you know those people who when they speak just draw you right in? They don’t have some kind of magical ability. Often, they can do it with tone and speaking speed alone. Let’s deal with them in reversed order. Your speaking speed should match that of the person you’re speaking to.

This is because a person’s speaking speed matches their thinking speed, which differs from person to person. If you speak slowly to a person who thinks fast, then they’re going to have reached the end of your thought before you do. And then, as they’ve got time to spare, they’ll drift off.

If on the other hand, they speak too fast to somebody who thinks slowly, there will be a constant struggle for them to keep up with your thoughts, which will make the conversation a strain and stressful.

Now, fortunately, we do naturally match each other’s speaking speed, but still keep an eye (or should that be ear?) open for when there is a mismatch and then adjust your speed to theirs.

Similarly, if you can use your tone to emphasize what is important in a sentence, you can make your words easier to understand and it far simpler for other people to follow what you’re trying to say. Boring speakers won’t vary their tone. Interesting speakers will make the words that matter just that tiny bit louder.

Don’t know what words to emphasize? Actually, you do. Just beat out the words you speak with your hand. Where you naturally want to gesture, you should also offer a tonal stress.

Unless the conversation is intimate, you should never be turned completely towards a person. That is far too confrontational. Two people talking will make a natural equilateral triangle, with both of them, turned at about 45 degrees from each other towards an imaginary third point.

A second thing to pay attention to is how in sync you are with the other people. If they’re naturally following along with your actions (e.g. they lean in when you do) then that means that you’ve got rapport and what you’re saying is interesting to them.

The unwritten rules of conversation

There are a few, but the most important by far is taking turns. People that speak too much are probably the worst of the two. It can be immensely irritating if you want to point out something or argue a point, but another person won’t let you.

The second situation, if you’re afraid you speak to little, it is often simply a matter of seeing if the other person is searching for things to talk about. Don’t just ask questions, as that will make them feel like they’re being interrogated. Good conversations are often a given and take of two people telling related stories with the occasional question thrown in.

Sometimes one person should speak more than another – for example, a boss giving instructions to their subordinates, or if you’re giving a presentation about something, like the ratings of the companies, then you shouldn’t be waiting for people to respond and just carry on with it.

The best thing to do is to focus on one thing in one conversation and then another thing in another. Cycle through them and they’ll become more and more intuitive. Try them out on people you meet – the cashier in your local shop, the bartender who seems bored because there are no customers, the barista at your coffee place.

The great thing about these people is that even if you mess up the conversation it won’t matter that much, for in the grand scheme of your life they won’t make or break you. So they’re great people to practice on so that you’ll be that bit better when an important conversation does roll around.

Malia Keirsey is a freelance web designer and an enthusiastic blogger. Her articles mostly are related to the business, marketing, and web design. She has started her path to the digital world five years ago after University’s graduation. Now she shares her experience and business tips through the blogging. Connect with @MaliaKeirsey on Twitter. 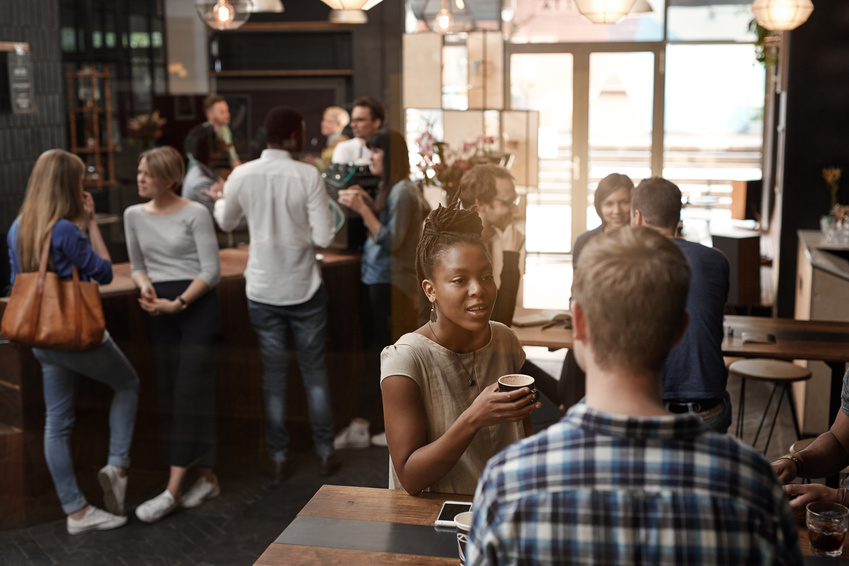