Here's how to get Pinterest to work for your small business.

The pinboard-style social photo sharing website may not be as popular as Facebook or Twitter yet, but it has quickly captured and kept the attention of the masses.

Allowing people to share their interests and creativity with ease by pinning images from their screen with a couple of clicks — some Pinterest brand advocates find it addictive. But it’s not just for consumers, businesses are finding success with the platform.

So how can you utilize Pinterest to market your small business?

While it’s not possible for users to purchase a product directly from a Pinterest board, you can use Pinterest as an effective marketing tool, have your images repinned by hundreds of users, and raise awareness with a direct link back to the original source – your company website or blog.

Here’s how to get Pinterest to work for your small business:

Start to follow influential and relevant people or brands, who have a huge following of active pinners. Once they get to know you and your business, they’ll tend to post about your product if it aligns with their interests. This can result in more repins, likes, and sharing making it easier to magnify the relationship via Twitter or Facebook.

Never forget to comment, like other pins and @tag other users by name. Say thanks when users repin images.

One of the huge advantages of Pinterest is the user friendly interface. Every pinner has space to create boards designated by interests or categories, where they pin images with a consistent aesthetic that help users navigate thousands of images with ease.

3. Cross promote with other social platforms

Don’t forget to communicate the existence of your Pinterest platform within your other dominant social media networks. Sharing your recent pins on Tumblr or Facebook can increase awareness and pinners. 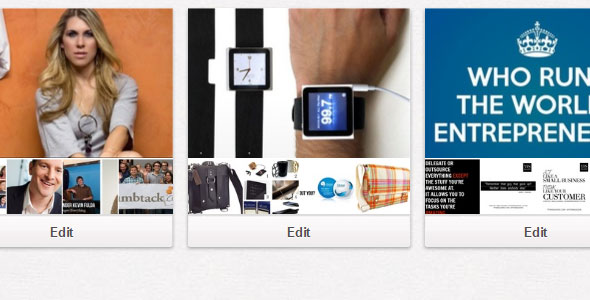