Learn how Curalate CEO Apu Gupta found success after failure and developed a social media analytics tool to help brands cash in on the power of photo sharing.

With the advancement of technology, mobility and social media, the shift from text to photo engagement has begun. Social media photo sharing platforms, such as Instagram and Pinterest, allow users to  engage with peers and brands … saying less and capturing more—via images.

Entrepreneur, Apu Gupta noticed this change in consumer engagement and decided to help brands answer the most challenging question on their minds lately, “How can we measure the effectiveness of photo sharing and make a business case for engaging customers on these types of social platforms?”

Gupta believed he and his team had the answer.

In 2012, Gupta co-founded Curalate to help brands understand how their images resonate with consumers. The platform applies advanced image analytics to social media conversations to give businesses the most robust insights available for Instagram and Pinterest.

A year later, Curalate has developed a client roster that boast over 350 major brands and agencies including The Gap, Campbell’s Soup, Michael’s and Michael Kors and global agencies, including Ogilvy & Mather and Edelman. “We have brands that have taken things that have done really well on Pinterest and posted that to Facebook and they found that those were their most engaging posts on Facebook ever,” said Gupta.

“One of the things that’s been so powerful about Curalate is that the insights that we deliver around images have implications that go well beyond social media itself and start to impact display advertising, e-commerce, email campaigns, as well as social media in general. I think it’s really interesting for brands to understand what they can ultimately do by understanding how images resonate with consumers.”

Learn how Curalate CEO Apu Gupta found success after failure and developed a social media analytics tool that has helped brands cash in on the power of photo sharing.

Curulate is a marketing and analytics suite that applies advanced image analytics to social media conversations to give small businesses robust insights for Instagram and Pinterest. We help the world’s largest brands strengthen their stories and turn pins, likes, hashtags, and followers into revenue.

We had fantastic press; we were on Fox, ABC, CBS, and NBC all in Philadelphia all in the same month. But we quickly realized the idea wasn’t working. We were just not getting very much traffic. In fact, we never got more than 3,000 unique visitors to our site in any given month. For a consumer company, obviously 3,000 visitors is just not enough.

A few months into that business, we recognized that [it] was just not going to be successful. Given all of the things we had tried, it just wasn’t going to work; or we just couldn’t figure out how to make it work. So we decided that we would shut that business down.

But our investors had already invested in us, and came back to us and said: “We invested in you and not just in your idea. We think you are a talented team. What do you want to do next?” We said, “Okay, we’ll get back to you.” We took a month off and during that month we generated 70 different ideas and tested a handful of ideas. Out of those 70, about 7 bubbled up to the top and we test marketed a handful of them. But one of the ideas that we really, really loved at the time was what became Curalate.

The genesis of that [was our observation of] brands clamoring to take advantage of Pinterest. They were all developing Pinterest boards (keep in mind this was late 2011 when we started to notice this). We saw that all these brands were trying to do things with Pinterest, and it felt very similar to what Twitter was like in its early days where brands were trying to get on Twitter, but were confused.

Before they could spend real money to grow their presence on Twitter or in this case, Pinterest, they needed to be able to measure their presence. They basically needed analytics. We had seen that story unfold before on Facebook and on Twitter, and we felt it was only natural that that the same story would unfold on Pinterest.

Once we started, we were really excited because nobody at the time was doing anything around it. There aren’t a lot of opportunities that you have where it’s a complete white space opportunity (a good opportunity) that nobody has really tried yet.

As we got into the problem a little bit more, what we recognized was that the issue wasn’t just analytics around Pinterest. It was that consumers were increasingly engaging with brands using pictures rather than words. As consumers started to speak to brands using pictures, what happened was that they didn’t use very many words and therefore all of the traditional social media analytics tools fell short because almost every single social media analytics tool is built around the ability to recognize text. Curalate is the first platform that was built around recognizing pictures.

This team has such resilience; the ability to come through a major restart, the ability to adapt to a new market, and to bring a completely new product to a completely new market is something that you don’t get out of a lot of people. What I discovered in that process was that I will take a great team over a great product any day of the week because they will find a way to make it work. I think our company’s biggest success story is our ability to form an amazing team.

Our biggest startup challenge was that our first business was a horrible failure. We had taken on investor money and produced a product that didn’t work. We, then, needed to figure out as a team what to do next.

That was one of the hardest things we had to deal with; the embarrassment of failing and the pressure of coming up with something that was worth everybody’s time and effort and doing it in a very short amount of time. In that process, I think we came up with something great but we, as a team, had to become a much stronger organization.

Balancing persistence with stubbornness. One of the things you find with good entrepreneurs is the ability to tear down walls and make things happen despite odds that suggest that you shouldn’t be doing this at all.

But at the end of the day, you have to balance that with objectivity that helps you understand whether or not your idea is a good one and is something that you should continue to break down walls for. That’s very difficult.

I think you get very emotionally invested into your ideas and you have to maintain a sense of objectivity. But you also have to give yourself certain metrics that you’re trying to hit and ask yourself whether or not you can hit those objectives. If you can’t, then be able to acknowledge to yourself that you’ve done your best but it’s time to move into a new direction. It’s a very, very hard thing for entrepreneurs to do. 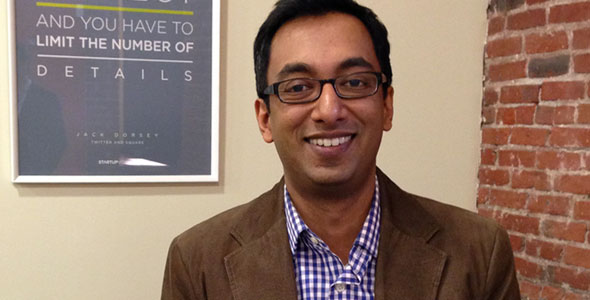