Love Him Or Hate Him, Donald Trump’s Brand Lessons Are Undeniable

What licensing lessons can you learn from Trump to extend your own brand? Like his signature hairstyle, there’s some major do’s and don'ts to take from The Donald.

“You can love Donald Trump, or you can hate Donald Trump, but what you cannot deny is the fact that Donald Trump has managed to make politics interesting again,” says Forbes contributor Amy Rees Anderson.

Presidential hopefuls have always been required to disclose their income sources, but never before has that procedure been so fascinating. Donald Trump’s whopping 92-page earnings report is a fascinating look at the mogul’s branded empire that extends from hotels to golf clubs and mattresses to neckties.

In classic Trump fashion, no stone is left unturned. Instead, every stone is branded in Trump’s signature gold. Yes, brand licensing is a major cash cow in Trump’s arsenal.

The Trump Foundation is the 106th largest licensor in the world, with annual retail sales estimated at $225 million, according to the trade publication Licensing Global. In the FEC report, Trump valued his recent royalties from licensing deals to be somewhere between $9.4 and $28.2 million—not a bad income for doing little work besides granting the rights to his name.

What licensing lessons can you learn from Trump to extend your own brand? Like his signature hairstyle, there’s some major do’s and don’ts to take from The Donald.

Elasticity is key to Trump’s successful licensing empire. The Trump image is built around a luxurious and successful lifestyle, a concept well positioned to stretch to a wide array of products and services, from international real estate to golf courses and home decor.

The ability to stretch from one offering to another depends on the perceived image of your brand. Is your brand stretchy enough to extend into new markets that organically communicate your company’s image and core values?

When Trump started as a New York developer, his first licensing deals were with luxury hotels, a renowned success. Then he branched out to golf courses, and next … retail products. To achieve his distribution channel strategy, think of every new arena as just one part of a massive expansion, a brand licensing stepping stone.

With such a large empire built around the cache of a name, Trump has to be vigilant about shutting down imitators that threaten his brand integrity. Since 2004, Trump has pursued 12 cases at the World Intellectual Property Organization, which protects website trademarks. While you probably won’t have to be as aggressive as Trump, it’s good to keep a lookout for imitators diluting your brand.

Disparaging public remarks can break most brands. Trump’s controversial remarks on the campaign trail have investors worried about his brand equity. Despite many companies severing ties with his licensed products, the reality is that his empire extends far enough to sustain such a hit. Most companies would sink under such backlash. Sometimes it’s best to leave politics out of it.

Ultimately, Trump’s campaign is drawing more attention to brand licensing as a viable way to earn serious money after building the value of a brand. Under the right circumstances, licensing will build the value of your company.

Jeff Lotman is the founder of Global Icons where he builds dynamic brand extensions, successfully elevating world-renowned trademarks and brands, including BMW, DIAGEO, Ford, Motorola, and others. 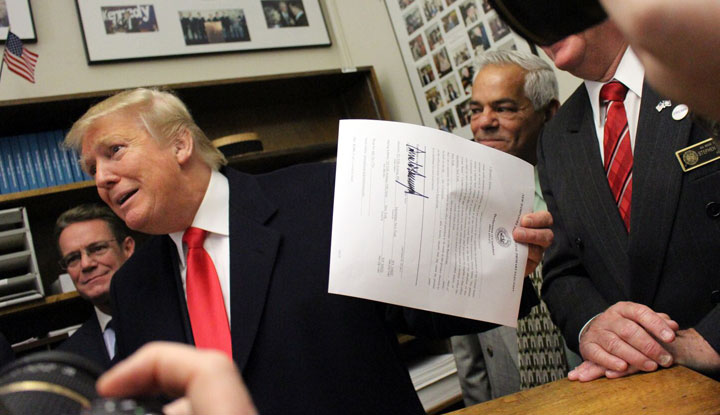