Here's a look at five essential lessons young entrepreneur can learn from young tech founders of some of today’s most successful startups.

For young entrepreneurs, there has never been a better time to venture into the tech industry. “Today nearly two-thirds of Americans own a smartphone,” according to Pew Research, while “there are 2.6 billion smartphone subscriptions globally,” and by ” 2020, globally there will be 6.1 smartphone users led by huge growth in less mature markets (TechCrunch).

Those same smartphone users access their favorite apps and  social media platforms on a daily basis. Meanwhile, there is a wider and more diverse audience for innovative new products and services and fewer  obstacles between an entrepreneur and prospective customers.

There also have never been more successful tech entrepreneurs to use as models for success. Forbes reports, in 2015, “fourty-six of the world’s wealthiest people are under 40 years old.”

If you’re on your own path to success, here’s a look at five essential lessons young entrepreneur can learn from young tech founders of some of today’s most successful startups.

Dropbox CEO Drew Houston, 32, founder and CEO of Dropbox, the successful online backup and storage business with a current net worth of 1.39 billion USD (2015) has guided one of the most successful startups in Silicon  Valley history to household name status.

For Houston, success means surrounding yourself with the right people. In 2013, as he gave the MIT commencement speech at his alma mater, he noted: “They say that you’re the average of the five people you spend the most time with. Think about that for a minute: Who would be in your circle  of five? … One thing I’ve learned is surrounding yourself with inspiring people now is ust as important as being talented or working hard.”

If you don’t surround yourself with top talent, you will find it hard to live up to your own potential. When putting together a team for your  startup, look for people who complement your skill sets.

You don’t need a lot of money to launch your first startup. In fact, in the case of Shutterstock founder Jon Oringer, you don’t need any “outside” money.

Shutterstock, an online stock photo site, was bootstrapped in 2003 with $10,000 and 11 years later he became New York’s first tech billionaire thanks to soaring stock value. A key to success, according to Oringer, is spending every dollar with optimal efficiency.

In an Inc interview he suggested, “that venture capital is [not] necessary to start a business. I started Shutterstock without any outside funding; I believe in creating a lean startup. By not taking outside investors early, I was forced to use every dollar I had as efficiently as possible. And I was able to keep a large part of the company.”

It’s a strategy that has paid off. “In 2009, Oringer was selected 41st on the Silicon Alley 100, an annual list of the 100 most influential entrepreneurs, investors, executives, and technologists in Manhattan (Crunchbase).

In 2007, tech entrepreneurs Brian Cheskey and Joe Gebbia couldn’t make rent on their San Francisco apartment. To make ends meet, they decided to turn their loft into a lodging space, but, as Gebbia explained, “We didn’t want to post on Craigslist because we felt it was too impersonal. Our entrepreneur instinct said ‘build your own site.’ So we did (Growth Hackers).”

A year later, they enlisted former roommate and engineer Nathan Blecharczyk to solve a big hometown problem in Denver. The city was slated to  host the Democratic National Convention, but there weren’t enough vacant hotel rooms to accommodate the thousands of delegates, media and political  operatives that would be descending on the Mile High City for the national event.

So they developed Airbnb, an app that provided a practical solution to a real problem, connecting tourists with Denver residents with spare bedrooms and  guest houses that they could rent on a short-term basis.

According to company reports, 50 million users turn to the Airbnb app to book accommodations and they are poised to upend the hotel industry (in a similar fashion as Uber did to the taxi cab market) by democratizing the process of finding a place to stay.

Lesson learned: If you want to create a startup that can grow very quickly, simply find a problem and provide a unique solution.

A lot of entrepreneurs share a common problem: they try to do too many things at the same time. By focusing your attention on a variety of different  opportunities and challenges, it’s too easy to lose sight of the big picture.

A better plan is to latch onto a single idea and follow it through to its logical conclusion until you can come up with a way to make it profitable.  That’s exactly the method Twitter co-founder Jack Dorsey followed—and it worked.

As a child, Dorsey was fascinated by how railroads worked, especially the way centralized train dispatchers could send brief messages to engineers on  trains hundreds or even thousands of miles away. Growing up, Dorsey continue to focus on this single idea, developing open source software that was used to  provide dispatch routing for taxi cab drivers.

In 2000, this led to Dorsey founding a company that dispatched couriers, taxis and emergency services via the Internet rather than the telephone. Inspired  in part by LiveJournal and AOL Instant Messenger, Dorsey came up with the idea of Twitter, a global web-based status and short message network.

Today, Twitter is one of the two largest and most successful social media platforms, along with Facebook. Thanks to his ability to take one idea and stick  with it, by 2012 Dorsey was named “Innovator of the Year” by The Wall Street Journal.

The key to any successful startup is to define a single, long-term goal. Facebook founder Mark Zuckerberg, illustrates this in the company’s mission to “connect  everyone, understand the world and help build the knowledge economy.”

Your goal doesn’t have to be as lofty as Facebook’s, but it should be as clear and concise. It should guide every decision you make and inform your  personal and company core values, which in turn will direct the company’s actions. For example, Facebook’s goal of connecting everyone has led to decisions  that attracts millions of new users each month.

Use the advice of these five tech industry leaders to create, launch and manage your startup to success and maybe one day in the near future you can join  them on the list of the world’s most successful online entrepreneurs.

Although these industry leaders may seem out of reach to the average entrepreneur, in actual fact they share the same common goals and attributes with all  successful entrepreneurs. Like all successful startups, every  entrepreneur can act as the catalyst that sparks a movement, that places the first building block or plants the first seeds of growth.

Sandeep Kumar, writing on behalf of Advance Systems, is a passionate digital marketing expert graduated from UCD Smurfit Business School Ireland. Areas of expertise include but not limited to content marketing, Search engine optimization, WordPress. In my free time I like to read technology and world news. A traveler and explorer like to enjoy frequent weekend escapes. Connect with @Advance_Systems on Twitter. 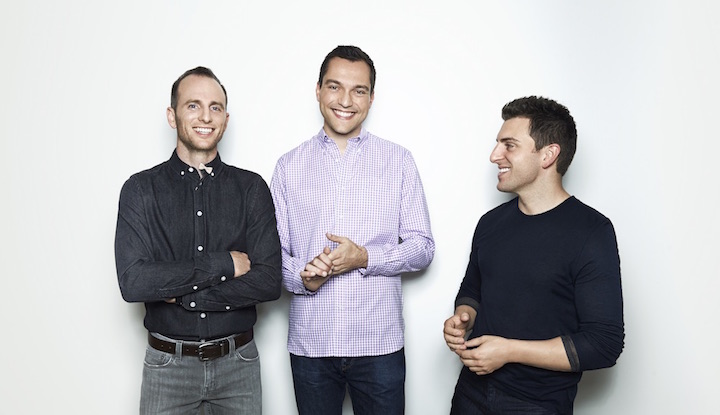